Following closely on the heels of the Crab Feed, Kids’ Fishing Day at Bennington Lake drew 67 young anglers to our local fishing spot. They all had chances to win prizes at the Casting Contest and the Biggest Fish Contest. And most of them enjoyed a hot dog and a Pepsi in between contests. An hourly raffle gave everyone a chance to win. The Jubilee Lake Kids’ Fishing Day was just a couple weeks later, in early July. There, 89 kids registered at the event cosponsored by the US Forest Service. All Casting Contest entrants received a prize for playing. Even Smokey the Bear made an appearance at the Casting Contest. Bradley Watko’s Biggest Fish Contest winner at Bennington Lake was a 14-3/8 inch rainbow trout. Julian Endersby’s 16- 1/2 inch rainbow took the prize at Jubilee. This year, the Steelheaders were invited by the Last Resort and Asotin Sportsmen’s Association to help with the Rainbow Lake fishing derby on the Tucannon River. Steelheaders board members Scott Landwehr and Tim Parker helped tie hooks and tell fish stories there. Board members Dave Crabtree, Richard Collins, and Larry Zalaznik handed out hotdogs, ran the registration table, and tallied the Casting Contest at Bennington Lake. Kids’ Fishing Days are made possible by proceeds from the Crab Feed, and by donors like Dean Woolery, who donated bait for the events. An anonymous donor provided 10 new fishing poles for prizes and to loan at the events. Sportsman’s Warehouse generously donated hooks, bobbers, and weights for all attendees, and new fishing poles as contest prizes. Pepsi donated soft drinks to go along with the hot dogs. 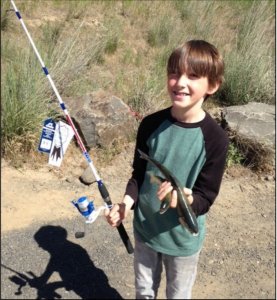 Ryan Roe, 9, didn’t win the Biggest Fish Contest, but he was a raffle winner. Here he is showing his catch for the day and his prize. 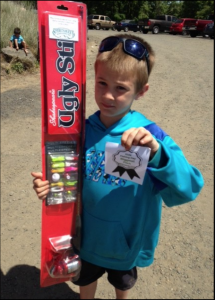 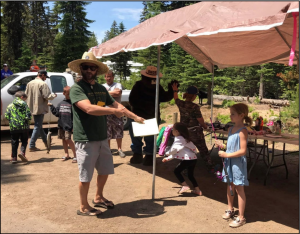 Your ticket for the: YOUR SUPPORT MADE KIDS’ FISHING DAYS POSSIBLE