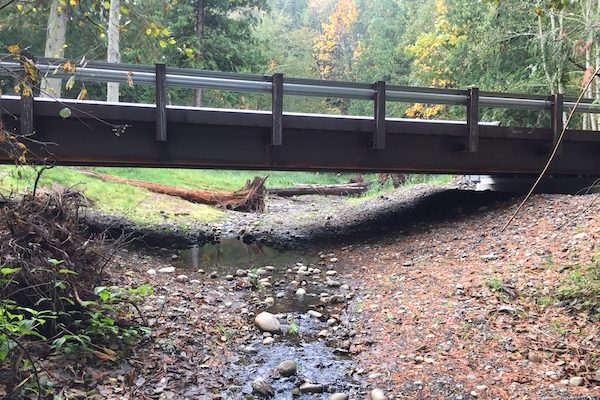 NSEA removed three consecutive barriers on the McCormick Creek tributary, two barrier culverts and a concrete dam that was in between them. The culverts were replaced with steel bridges. The Dam and associated sediment were removed and approximately 300 feet of new channel was constructed mimicking upstream and downstream reference reaches.

The project provided fish passage to 1.1 miles of largely undisturbed spawning and rearing habitat. The dam had been constructed in the early 1900’s, to provide water for agricultural purposes, and had slowly filled in with sediment over the years. NSEA worked with the landowner to progressively drill holes in the dam to drain the upstream pond without allowing fine sediments to migrate downstream where it would be detrimental to fish and other aquatic organisms. Once the pond was drained and the remaining sediment was dry enough to excavate, a majority of the sediment was removed.

Left – 2 of the 3 barriers replace, including a damn and an undersized culver. Right – the steel bridge that replaced a culvert.

A new channel was constructed using large logs with root wads supplied by the landowner and a sandy gravel / cobble mix suitable for the slope and discharge of the creek. The result is a series of small pools with cover to provide rearing and holding habitat and several riffles suitable for spawning.

The site was recently planted with appropriate native vegetation and mulched by the NSEA / Whatcom County Washington Conservation Corps crew. The landowners were amazing to work with through the entire, somewhat messy process. We are all eager to see salmon return after their passage was blocked for so many years

Your ticket for the: McCormick Creek